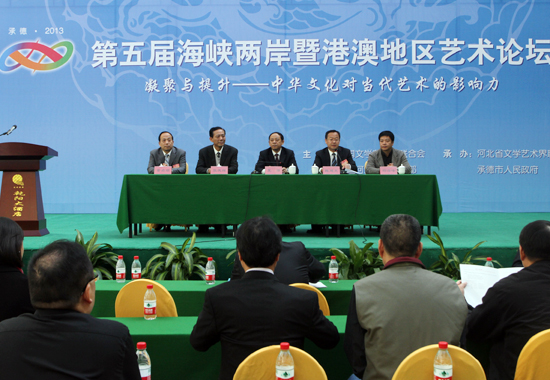 Spot on the Art Forum

Since ancient times, Hebei Province has been a birthplace for many tragic martyrs in Chinese history including the well-known tragic assassin against the 1st Emperor, Qin Shi Huang—Jing Ke. As a part of Hebei Province, Chengde, which used to be the imperial temporary palace location with the name of Rehe, still preserves a magnificent view of military horse-training and deer hunting in the autumn despite the passage of several centuries. On October 14, the 5th Art Forum of Mainland, Hong Kong, Macao and Taiwan, jointly sponsored by CFLAC, Publicity Department of CPC Hebei Provincial Committee, Hebei Federation of Literary and Art Circles and Chengde Municipal Government, was grandly opened in Chengde.

Under the theme “Cohesion and Promotion—Chinese Culture’s Influence upon Contemporary Arts”, artists from Mainland, Hong Kong, Macao and Taiwan expressed their unique point of view in the respective art disciplines through keynote speech, group discussion and roundtable meetings.

In the session of keynote speech, Xue Yongnian, professor of Central Academy of Fine Arts, Wang Yingwei, president of Arts Development Administration of Hong Kong, Wu Shaoying, president of Macao Visual Arts Society, Yan Gongda, vice president of China Calligraphers Associaiton, Pan Huanglong, ex-president of Music College of Taipei Art University and president of Asian Composers Alliance, delivered their speech and put forward their suggestion concerning the relationship between traditional humanism and contemporary arts, protection and inheritance of original culture, current development of Chinese arts, East-West integration in contemporary arts, international trend of contemporary art development, prosperity of Chinese culture and arts in the circumstance of Whole-Media Age. As Wang Yingwei mentioned, in face of the international trend of arts, it is extremely important to inherit traditional culture and promote new talents and guide them into a new era. In his opinion, it is necessary to enable the entire world to appreciate Chinese culture and promote exchange, learning from each other and finally common progress. Adopting the philosophy of Integration of Man as Part of Nature, Yan Gongda elaborated on Middle-Course Harmony, the core ideal of Chinese culture, and advocated in-depth doctrine understanding in calligraphy and painting. Yan stressed that mainstream culture be encouraged to awake subjective awareness of people. Xue Yongnian, Wu Shaoying and Pan Huanglong explained their scholastic views respectively on “Freehand Spirit and Culture of Harmony”, “New Ink and Brush: Combination of Tradition and Modernity” and “Music: Innovation from the Root of Tradition”. Such series of speeches provided lots of inspirations for cohering and promoting current influence of Chinese culture.

In the meanwhile, group discussions about literature, theatre, folk arts, film and TV, photography, music, dance, Chinese Quyi, fine arts and calligraphy as well as the roundtable dialogue under the theme of “Folk Culture, Hebei Culture” were all on passionate progress with fruitful outcome. Chen Zhiwei, board director of Macao Yiyuan Calligraphy and Painting Society, commented on Hebei culture as masculine heroism. According to his research on South Music originating from Central China to South, he demonstrated the time-honored and charming Chinese culture by singing his creation with South Music fractures on the spot. Zhou Zhiqiang, professor from Literature College of Nankai University gave a fresh feeling on folk culture from the perspective of globalization period. Today, people will talk about local culture in a global or panoramic way instead of their own experience. In the past, folk culture functioned as cohered mass at the bottom of society while currently folk culture will fall into anxiety unless it manages to occupy its own position in the global cultural vision. In other words, the practitioners of local cultural industry must have self-awareness to integrate their local culture into the global background besides persistence in their tradition.

In the course of the Forum, all the participants visited photography exhibition, calligraphy and painting exhibition and folk craft exhibition by Hebei artists. As their works derided from folk cultural scenery and living conditions with distinct styles and expressions, all those exhibitions became a visual window for understanding and feeling about Hebei and Chengde. Moreover, artists also enjoyed the resonant but melodious lyric and vocality of Hebei Bangzi. The sculpture artist Wu Weishan and film director Yin Hong gave lectures in Hebei Nationality Normal College and Chengde Petroleum Advanced College with respective titles of My Value of Culture in Sculpture Art and Understanding Films in Window, Mirror, Lantern and Dream. Their sharing of artistic practice and theoretic research as well as focus on art training and original ideology was highly recognized and warmly welcome among teachers and students.

As mainland, Hong Kong, Macao and Taiwan share the same gene of Chinese nation, it is commonly acknowledged that to continue such cultural exchange forum will facilitate to strengthen cultural identity, fraternity and power of cohesion. Thanks to constant efforts in a long term, the cultural exchange across the Taiwan straits and in Hong Kong and Macao will take up a brand new outlook.