To Pursue the Maximum Cultural Confluences 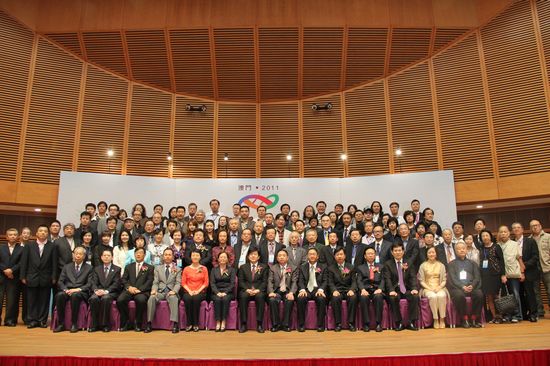 Group Photo of Delegates of the Forum

“Artists and theorists might compose a poem, draw a painting and write a song inadvertently for Macau. If they want to have some peace of mind, they can wander into Macau; if they want to produce creative works, they can visit Macau as well.” 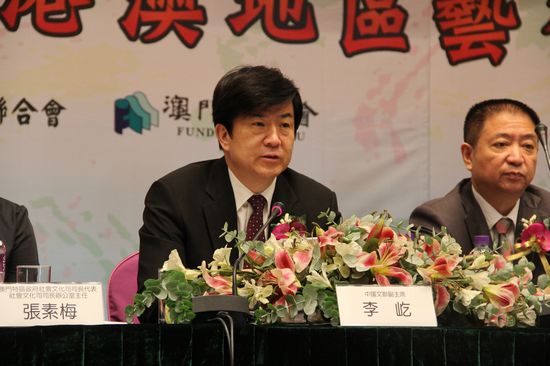 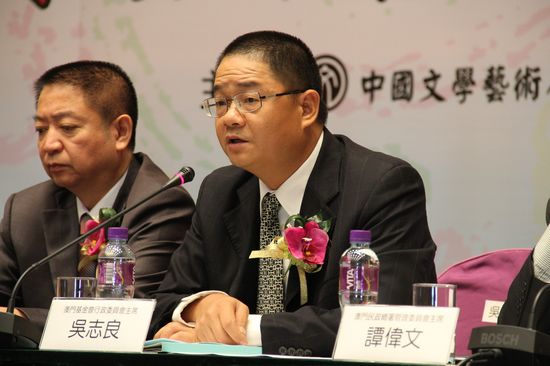 Opening Ceremony of the Forum

It’s the wish of Zhong Yi, Member of Macau Foundation Administration Committee, who expressed these words at the Third Cross-strait, Hong Kong and Macau Art Forum. These words brought forth the richly amiable atmosphere for the whole forum. From October 24th to 28th, the Forum and its related activities were held in Macau, which was sponsored by CFLAC, Macau Foundation and undertaken by Hong Kong, Macau and Taiwan Office, the Theoretical Research Office of CFLAC and Chinese Ballad Singers Association. Guangdong Provincial Federation of Literary and Art Circles, Chinese Art Journal and Macau Office of Cross-strait Relations Association rendered special supports to it as well. 80-odd famous artists, experts and scholars in cultural and art fields from cross-straits and Hong Kong, Macau participated in the Forum whose theme was “Dissemination and Confluence: the Development of Chinese Arts against the Globalization and its Future.” 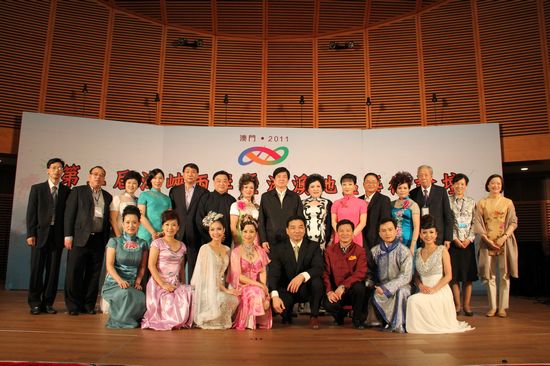 Group Photo of Leaders,Distinguished Guests and Quyi Artists after Performance 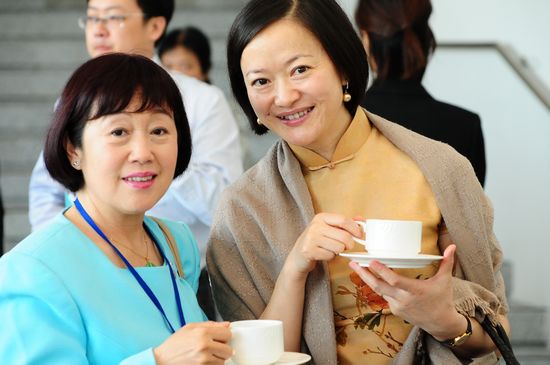 Exchange of Literary and Art Information

Exchange of Literary and Art Information

During the course of the Forum, Chinese Ballad Singers Association organized ballad artists from Hong Kong, Macau, Taiwan, Shandong, Zhejiang, Guangdong, Guangxi, Tianjin and Jiangsu to present the special performances. Guangdong Ballad, Monochord, Shaoxing Songs of Lotus Flowers, Guangxi Wenchang, Plum Drum Ballad, Storytelling, Suzhou Storytelling Ballad, all those familiar or unfamiliar, known or unknown forms, artists and scholars from four regions were all versed in the contents, stories and cultural backgrounds of programs. The charm of language with the same origin and identity of Chinese culture was presented in Macau again. 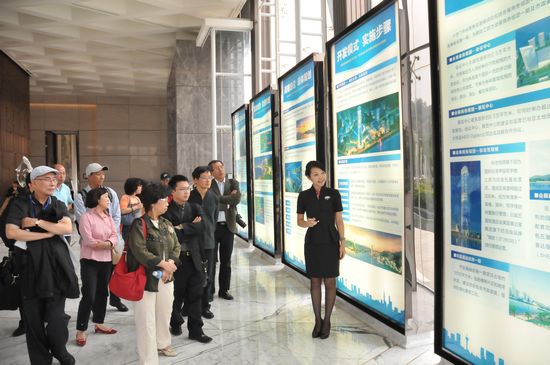 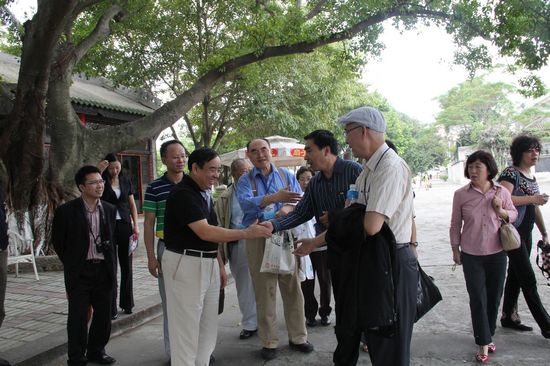 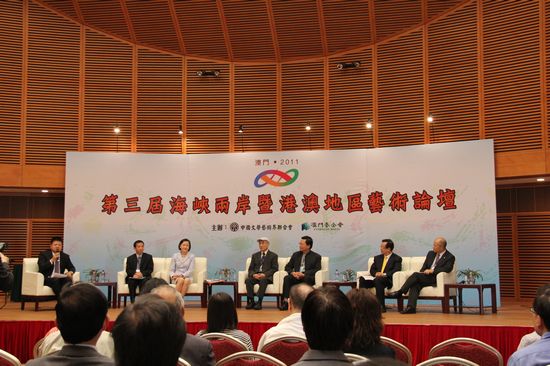 “Before the return of Macau, civil servants must learn Portuguese, while Portuguese are learning Mandarin and Cantonese as well. After the return, all the governmental and educational institutions adopt Mandarin and English naturally as the universal language in commerce and trade.” In the eyes of Zhong Yi, three verbal languages and four oral languages of Macau not only bring out the special language environment through interaction, but also present the tension and tolerance of Macau, a “special case” of Chinese culture, in the field of popularizing Chinese culture for more than 400 years. “Dissemination of language is not to conquer, but to win over the foreigners with our culture through languages and words.” Zhong Yi remarked. 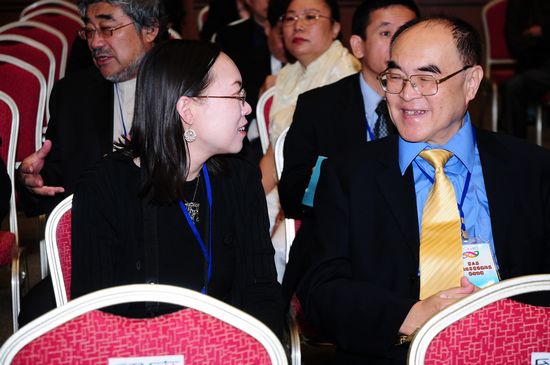 Xu Xin and other Experts Lectured at Conference

“We recognize the dominant position of visual art in today’s exchange, but we should reinforce the construction of value system of traditional textual types, such as literature and language and the distillation of cultural symbols in order to dispel the strange phenomena that raw, rustic, coldly-witted, cynical aesthetics prevails in Chinese culture ever since the new century.” Wang Yichuan, Dean of Peking University’s School of Arts said. 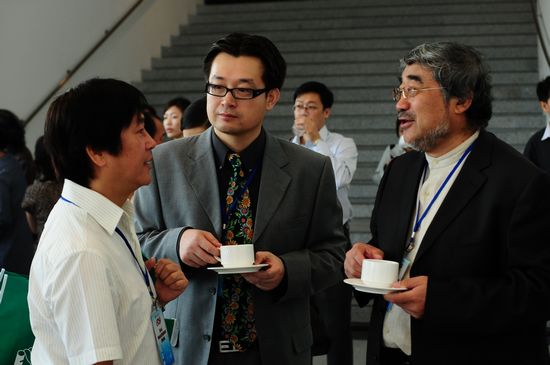 Passionate Exchange in the Intermission

In order to avoid the cultural aphasia caused by utilization of digital technology or the strange phenomenon that the public sentiments misguide people, Jiang Zonghong, Executive President of the Taiwan Chinese Cultural and Art Federation believed that information from digital media should be more diverse with more profound depth. If the four regions reinforced cooperation and set up an online platform to collect the art information of the four regions, loads of cultural innovation ideas and capitals could easily find the suitable outlets through the mutual supports and accumulation. The whole image of Chinese culture might be improved tremendously.

“In Macau, I have seen the round moon, which reminds me of the Dance Drama ‘Flying to the Moon’ that was created and directed in the mainland in 1980s and the related Hong Kong Dance Drama ‘Round Moon’, ‘The Song of Vagabonds’ of Lin Huaimin from Taiwan and the Dance ‘Flying to the Moon’ of Macau Academy of Performing Arts. Ying Eding, choreographer of the Macau ‘Flying to the Moon’ used to be a dancing artist in Shanghai and had the preference for the free non-fictional and non-theatrical expression spontaneously. He chose to settle down in Hong Kong. After the return of Hong Kong in 1997, he thought he himself should seek another tranquil place, therefore came to Macau. Henceforth, he initiates the new phase of Macau dancing creation, viz. to pursue the unique free expression and present the loose relationships between people. From the experiences and stories of this artist, we can find the unique positioning of Macau in the cultural circle of China and its ensuing story of exchange caused by the round moon.” The art progress and sentimental story of this Chinese dancing artist mentioned by Feng Shuangbai, Vice President of the Chinese Dancers Association is just the landscape in which Chinese artists and culture travel around in these four regions.

“Dissemination is not to conquer, while confluence not to replace. The Chinese cultural circle aims not to deliberately choose enemies and is not engaged in cultural chauvinism, but broad-minded.” Scholars such as Xu Xin, He Peishan and Lin Yandan etc. believed that the key to build up the confidence of Chinese culture was to reinforce the cultural exchange between the four regions in the spirit of co-ownership.

“In terms of art, how is the opposite described in each cross-strait art history? If we don’t write it simultaneously, it will not be complete. As for the issue of constructing the cross-strait Chinese aesthetic system, we have lots of things to do and there are so many cultural and historic things that need the suitable cooperation.” Chen Chunlin, Secretary General of the Taiwan Shen Chunchi Culture and Education Foundation held it that on the road of Chinese cultural reinvigoration, the cross-straits should advance hand in hand; the mainland was the main body of inheritance, while the experiences from Hong Kong, Macau and Taiwan were vital as well. “We wish we establish the art federation from the four regions or jointly set the award of culture and art, which could become the good platform to exchange and disseminate Chinese culture.” Lin Yandan said.

Zeng Zhaoxun, Associate Professor of the Department of Dance, the National Taiwan University of Arts felt regretful because she came to Macau but missed the chance of enjoying the performance of Cirque du Soleil. But she was wondering, “Why do we want to see the performances of those with white skins and yellow hairs? If we pool the capital, dancers, creative and technical teams from the four regions together and integrate all these resources, the future tourists to Macau might have the chance of enjoying the standing performance of Chinese dancing troupes besides Cirque du Soleil? Will there be a more professional cultural surge?”

This straightforward lady bombarded the forum with questions and examined herself. Wu Yuxin, the amiable and elegant Hong Kong vocal musician repeatedly comforted Zeng and said, “It will take time to disseminate culture. We not only need to popularize it, but also need the improvement of exchange. The last layer is the professional discussion and analysis. So, we should move on slowly and give more chances to the Chinese culture and let others have opportunities of understanding our culture slowly.”

Amid the atmosphere of research and discussion, Macau is to receive the blowing winds from every corner and expects to have a bigger cultural confluence. Just as Zhong Yi has said, “Culture purifies our souls, makes the innocence out of us and provides us with a pure world”, which enables us to have more spaces of vision while looking forward to the development and future of exchange.

“We have the pre-destined affinity, so, let’s say goodbye with our love.”